My prayers of completely bypassing winter for warmer days of Spring went unanswered. The whiteness illuminating from the reflecting snow outside crept into our room far too early considering our diligent tour of as many of the city’s sights, sounds and tastes as palatable in a single evening. We slowly began gathering our things, resembling a pair of zombies searching for their morning “Brrraaaaiiinnnnsssss.” Grunts and moans were all we used to communicate while the antidote for our sickness in the form of thin hotel room coffee brewed atop the cabinet. Showered, shaved and ready to meet the world, although we were not fully awake, the cold Ohio air would soon remedy that.

Breakfast was one of the best I have had in many days. Grumpiness soon began to lift, no match for freshly brewed coffee, eggs, turkey sausage and a big stack of buckwheat pancakes with organic syrup and fruit. Usually I opt out of the fruit-on-pancakes option fearing healthy food would throw off my delicate balance permanently. But the combination was wonderful. I emailed myself a note to learn how to make buckwheat pancakes. Jill, sensing our trendy surroundings, and gazing at me head first in my portable device, said, “You’re such a yuppie. You know you fit right in.” I would argue, but with coffee in one hand and an iPhone in the other, I looked like the plus sized poster boy for Apple.

Plump and happy, our final stop was on the horizon. Jill had found a sale where some elusive Heywood Wakefield pieces would be on the block. Given their rarity in these parts, we had to go wade in to see if we had even a grim chance of acquiring a couple of pieces. We were once again venturing into uncharted territory. Sunday auctions are infamous for commanding larger prices, at least in our experience. That coupled with heavy advertising, and our chances were slim. 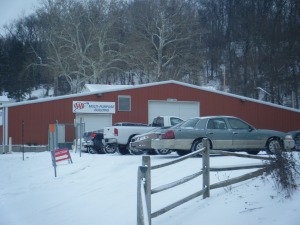 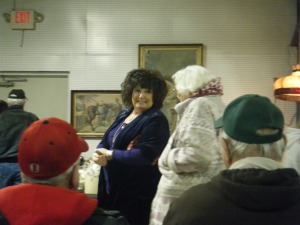 The auction was held in a large warehouse on the outskirts of town. We parked and headed in amongst trucks with trailers, trucks with campers and several box trucks lettered with their companies names. Not a good sign. Neither was the scene inside. The place was packed. I mean packed. I actually had a concern that if we were able to bid, the chances the auctioneer could see us amongst that sea of people was slim. The auction crowd filed in while I observed them, totally unaware of my secretive judgments. Townsfolk laughed and joked with each other, kidding that they didn’t even bring money to the auction today, just wanted to get out of the house. Others downplayed their interest in a particular item they happened to be examining or hovering above for the better part of an hour.

Low bid numbers lingered. High bid numbers feverishly searched for particular items they had on their checklist. I sat back an watched the floor come alive with bidders and gawkers alike. The items sat in their prospective spots, shiny and proud, awaiting their appearance on the grand auction stage. A half-hour before the auction began, the auctioneer began piping in twangy old country music thru static filled speakers. Since my location was not in some dive bar way too early reflecting on my misreable life, I did not need the accompanying soundtrack. Especially not at a packed auction house on a Sunday morning.

Sounds of Conway Twitty’s “Play Guitar Play” filled the room, along with laughter and unwinding tape measures. Note to self…bring ear plugs to the next auction. I watched as an old farmer inspected a beautiful nude painting well beyond a comfortable time period. I’m talking, closer to five minutes, inspecting only one particular area of the painting. It was a site to beyhold, though it seemed everyone was straining not to see this particular site. I recall jotting down several notes to remember to write about the experience: John Deere hat, farmer long stare, over-the-shoulder exposed boob. Think that about sums it up. 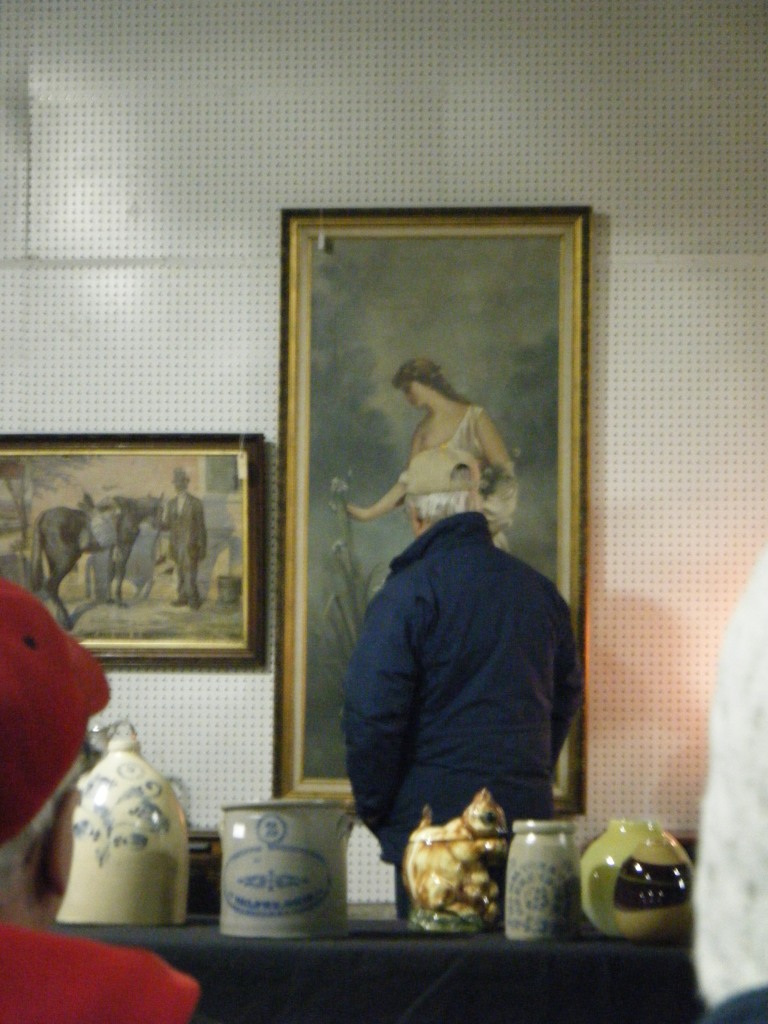 Lingering a little too long in front of the topless art…

The auctioneer was friendly and full of energy. He started with the standard terms and conditions of the sale, buyers premium, pick-up and obligatory praises aimed at the snack bar located in the back, although nobody in the house could ignore the presence of the snack bar, especially its wafting smells. Like an explosion, the auctioneer perfectly timed the collective coffee surging with the bloodstream and his opening cry of, “Hey, Hey Mama, let’s go!!” We all jolted forward in our seats and the auction was off.

Opening prices were high, as they usually are. Early on everyone has buying fever and many let the auction format get the best of their judgement. The “buy, buy, buy” frezy is difficult for anyone to thwart. During the show, I noticed a frail lady directly in front of me. She wore square glasses and a lacey shawl, delicate clothing to match her equally delicate disposition. I noticed she was constantly scanning the marketplace for her mate. Every few moments she would begin her laborsome task of moving her tiny frame into position to scan up the long isleway to look for her fella. Sitting directly to her left was a portly lass sporting an Ohio State crochet bonnet and matching sweatshirt. The big gal kept edging closer and closer to the frail lady, practically edging her out of her seat. Now, as a big fella myself, I can tell you this move was intentional. Just because you have extra meat on your bones does not mean you are unaware of your outcroppers. She was annexing the poor little old lady’s space like Germany annexing Poland. I immediately had distain for a person I had never even met. Here’s the most annoying part: while the little old lady turned to scan the crowd, the big gal would peer over her shoulder to see what she had written down about the previous or upcoming auction items…a definite breach of auction eddiquite and ethics. After edging the old lady for about an hour, the little old lady got up to look for her fella. The portly gal immediately gave her seat to a couple who asked if the seat was avalible. I began to say something but didn’t. Turns out, the new couple were even more annoying and, while sitting on each other’s lap, slowly edged out the portly lady until she left…never to be seen from again. Mu-ha-haaaaaa. 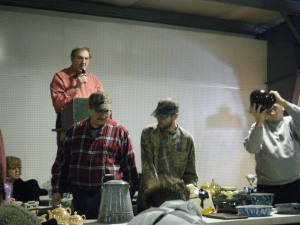 There were some memorable moments at the auction. The auctioneer, when things were lagging, would sell items to the cadence of one-little two-little three-little Indian. That was odd. As was his bid-calling assistant who, as far as I can tell, was a bit shell shocked from the auction format. He would yell a hearty “Yuuuup!” at weird times, and twice when the auction was over and the auctioneer was describing the next item. The auctioneer would make a quip at his expense and the sale would continue without missing a beat. Once while auctioneering a pool stick set, the auctioneer said, “What-ya-got-thar? I can’t see on-a-counta the rack.” I leaned to Jill and said, “He’s talking about you, you know.” I giggled despite the swift elbow to the ribs. There was an Andre the Giant look-alike that helped display items.

Andre the Giant as a Cowboy

He had a chew in the entire time, never saw him spit once. And his greasy finger-nailed hand would proudly display some of the finest antiques in all of Ohio. Then there was the flannel clad chunk that also helped hold up items. When he did, his big round belly would show and Jill would snicker every time. And lastly was the apprentice auctioneer. Described by my partner as a Mad Men stand-in, he was handsome, well groomed, well dressed and, well, out of place. As the final items crossed the block, he was called in as a sort of third-string auctioneer. Fortunately he did a nice job coming off the bench.

The auctioneer’s had two O’s in his name. As a huge James Bond fan, I automatically gave a lot of favor to anyone with double-o status. It was a fun auction. Jill won some, and lost some. Most importantly she won the main couple of items she wanted, which included her coveted Heywood Wakefield night stands, now a welcome addition to our bedroom. I loaded while Jill paid, our standard end-of-auction arrangement. Afterwards we headed to a local Mexican restaurant, another post-auction tradition. Jill had a glass of wine and I had a beer. No margaritas due to some oddball local blue-law that said those two alcohol drinks were ok, but hard liquor, like the kind found in a Margarita, were bad. I’m sure the Lord would be pleased that little town took such a hard stance. We enjoyed the momentary downtime as we prepared to head south again.

“I had a good weekend,” I toasted. “Me too,” Jill returned. “This has been a pretty lucky weekend.” “What do you mean,” she asked. “Well, you were lucky to win the original auction items. Afterall, that’s why we came up in the first place.” “True.” “And we were lucky to find the first ever February Garage Sale.” “Don’t know if that was luck so much. That was just bizarre.” “And how about the room? That was lucky.” “More for you! Since it was right in the middle of the cheerleader invasion of 2013.” “Well then, you have to admit the luck we found in this place. Probably it’s the luckiest ever!” “That’s true,” she said. “I did get some furniture I’ve been wanting for a long time. You’re right, we did get lucky.” “Hmmmm. That’s not what I was talking about. I meant here…here. We are lucky to find this place. Afterall, this is the first Mexican restaurant ever that has delivered our food without the plate being hot. ‘Hot plate.'” She giggled. And I’m serious. It’s the Mexican restauant Holy Grail. It’s called Fiesta Tropicana in Lancaster, directly across from Carnival Foods. Good food, good prices and no hot plate. (Feel free to use that catch phrase fellas. I got plenty more!)