This was one of the few times we didn’t fully scout out the town we were heading to. By time to cast off, normally I have lodging recommendations, GPS coordinates, have checked highway conditions and have already picked what I am going to have at dinner that night from the best reviewed restaurant in town. But not this time. This time we were truly winging it. We knew the area we wanted to stay in, which was close to some vintage shops and restaurants, but nothing prepared us for the scene when we arrived. 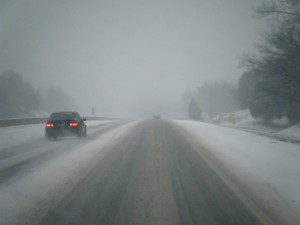 Snow was coming down in pillows. Big, fluffy, can’t-see-your-hand, stings-the-back-of-your-neck, pillows. Towing the trailer made navigating downtown that much more challenging. We finally settled on a hotel that seemed to have easy parking access for our antiquing rig. While Jill ran inside, I slowly became surrounded by girls, ladies and women. Hordes of them descended on the city. Some wearing dresses, gowns, jeans, but all made up to the “nth” degree. I guess I didn’t realize the dome light had illuminated the inside of the truck. As I followed a couple of the ladies, my eyes met Jill’s.

“There’s a cheerleader competition this weekend. Try and keep your eyes in your head, sick-o.”

I would have tried another attempt at an explanation, but I had been busted. Fortunately the Rah-Rah’s hadn’t gotten every room. Jill snagged the last one, probably in the entire city.

We exited the parking lot, found the designated hotel lot across the road and abandoned the trailer into one of the empty spots. We then turned the Suburban toward downtown. We found a very trendy area littered with awesome eateries and vintage shops. Upon entering one shop in particular Jill offered a hearty, “Hello!” barely thru the door. It was uncharacteristic of her so I gave her the obligatory what-the-hell-was-that look? She shrugged, turned a little red and headed inside. Come to find out, she was just so excited to see such a cool place, similar to her little shop back in Lexington, that her words beat her brain in a heartfelt salutation.

We ate such good food. And drank such good drink. Two highlights: the first was a bar that specialized in old style cocktails. Very cool, very hip, and those words aren’t usually in my repertoire. Jill had a French 75 which contained Gin, Champagne, Lemon Juice and Sugar. So named for the supposed kick the drink has, it’s like being shelled by the French 75mm field gun. Now look, the drink was excellent as was the place, so far be it from me to make some off-handed remark about the French. I love French cooking, French drinks and everything French. Just because I am a budding humorist, don’t expect some stock derogatory French comment. It’s just not going to happen. Nope. No. Ok, instead of an olive spear, every French 75 is garnished with a little white flag. Sometimes I just can’t help myself.

Only burners in the house…

The other culinary highlight was at a little restaurant called Flat Iron. Long and narrow, the Flat Iron is undoubtedly named after its famous New York namesake. It’s not only a brilliant use of space, but the drinks were delicious. Due to the tight quarters, three cooks occupied a space no larger than most residential kitchens. We watched master chefs flip and sauté and style food dishes in the blink of an eye. There were only two burners available, so the three working together looked like poetry in motion. The hotel was next door so we indulged in some late-night wine. We sipped and watched, watched and sipped. The cooks were so memorizing that even I was speechless for a long spell. I was envious of their skills and vowed to cook more. We thanked both the head cook and manager for such an unintentionally entertaining evening, apologized if we seemed like stalkers and headed next door thru the packed snow to our room. I drifted off to sleep warm and content hoping not to stir until well into the warmth of summer.